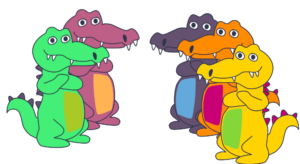 A big loss factor in many organizations is unclear decisions and thus often a failure to achieve the goal of various meetings: are all the necessary people present? Are more than the necessary people present? What is needed to make the decision? Is this group actually allowed to make this decision and what does that mean then? So specifically, is this a valid decision or will it be brought back to the table, challenged, questioned, ignored, discussed again, ultimately resolved in the next meeting, perhaps in a different set of participants, thus nullifying both meetings?

Self-organized teams need clarity about the decisions they are allowed, willing, and able to make, as well as clear strategies for bringing about those decisions so that they are subsequently supported by everyone, in and out of the team.

Let’s have an overview of different decision-making strategies:

Democratic decisions are made according to the majority principle, so in short: the options are presented and everyone chooses one, or more, depending on the context. Then the options are counted and the option with the most votes wins and is used. Most teams use this way of decision making without questioning it. Probably because we live in a democracy, probably because this is what we have always been taught, probably also because the decision can be made very quickly via show of hands or dot voting, which is of course very important if the meeting has been overrun anyway.

But what happens if we choose one out of 4 possibilities by a very narrow margin, e.g. with 26% of the votes. Then this also means that 74% of the people involved do not think that this option is the best. What does it mean for the motivation of the people involved to support and defend this decision? The obvious answer is to rehash the topic in the next meeting and hope to push through one’s own opinion, one’s own preferred solution through a new vote… ever seen this before? Probably.

The second decision-making strategy I’d like to introduce here is autocratic decision-making. “Ohhh – bad!”, someone may now think with regard to a conservative sole-determining owner of a company and point out to me that this is then not a team decision and in the agile context we decide in a team… really?

First of all, the decision strategy chosen depends on the context and there are definitely situations where one person alone has to make and follow through with serious decisions, even in the agile setting.

Let’s look at the product owner: he decides on the priorities in the product backlog. He alone is allowed to do that. Must do that, wants to do that and can do that. Hopefully. Probably he will consult with other people about this: stakeholders, development team, management, customer. But in the end he decides. Alone.

What influence the autocratic decision has on the people who will implement this decision or who will have to live with it depends on his lived role and the individual person of the decision maker: does he really get the authority and support from the organization to decide on his own, or will his decision be questioned or even revised afterwards? Can he clearly communicate his arguments for the decision so that they can be supported by everyone? A great deal depends on this.

Another decision-making strategy is the consultative individual decision. As with the autocratic decision, there is an expert who decides. However, it is explicitly expected here that the decision-maker obtains the arguments of the participants and thus decides.

Furthermore, there is the systemic consensus as a method for group decision-making: everyone agrees. This is realistically applicable to a small group of a few people. However, the larger the number of people, the longer the discussion takes to find a solution that everyone can agree on. This effort easily leads to agreeing on only a very small and insignificant decision: then what is the point at all?

Increasingly, consent is being used as a decision-making method in the agile team: no one is strictly against it. This means that in a vote, everyone has a veto, but must explain it with valid reasons. Afterwards, these points are worked on until a variant is found with which no one has a solid counter-argument: everyone either agrees or can live with and support the proposed solution.

A consent can be reached much faster than a systemic consensus, but of course slower than sole or majority-based decisions.

The important aspect is that every counterpoint, every appropriate criticism is heard, is asked for, is resolved: in the process, existing knowledge can be shared just as new knowledge can be gained, risks can be uncovered, opportunities can be communicated. So the time invested in generating the decision is a productive work session.

Moreover, in consensus decision-making, one has 100% motivation of all participants to carry and support this decision. It will not be easily questioned again down the road.

You could also let chance decide and flip a coin. Don’t smile: this is a permissible and important strategy! If one simply cannot elicit whether variant A or B is better, this can also mean that both are equally good and the next important step would be to agree on one and pursue it with focus. One saves a longer phase of indecision, in which actually already further insights could be gained and product features could be worked out.

And finally, there is the small but subtle difference between these two strategies:

Even though I write here that decisions must not be immediately questioned again in the next meeting, in order to create clarity and consistency for all, I would like to explicitly emphasize that one is of course allowed to revise or change any decision as new insights and knowledge are gained. Again, this is a renewed decision, possibly with a clear strategy.

Now I am curious about your feedback and comments: how do you decide? what experiences do you have?

View all posts by Anja Stiedl →